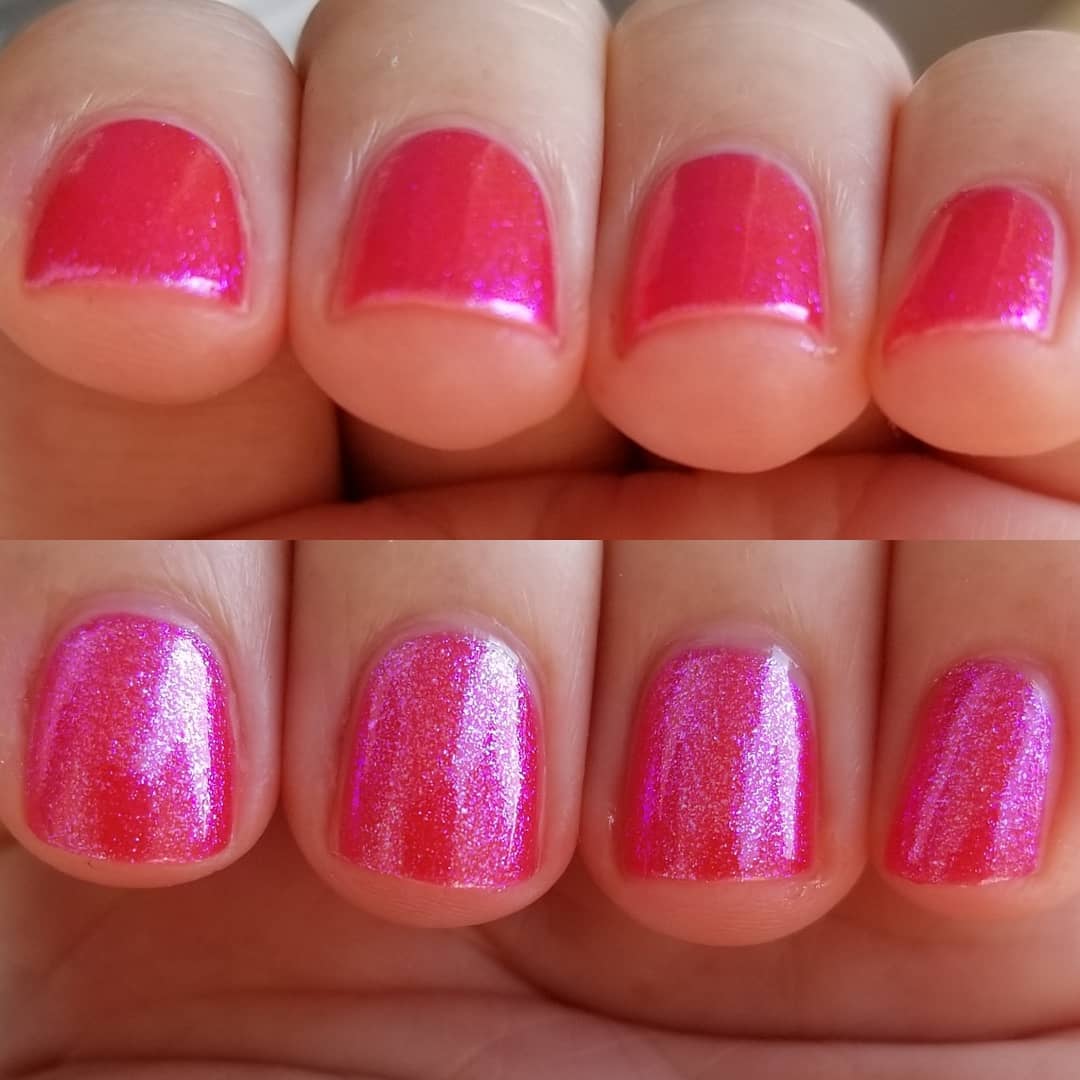 Last time Essie came out with a similar set, the two-color Mercury in Retrograde collection, I inadvertently passed on it because it sold out before I made up my mind about it, and I don’t think it ever got restocked. This time, I was determined not to let it happen again, and Ulta happened to have a sale at the same time, so I picked up the Universe in Reverse duo pretty much right away. It seems like this set didn’t sell out super fast like Mercury in Retrograde did, though – it’s still in-stock at Ulta online as of the time of this writing.

Here’s two coats of Get a Psy-kick out of It with top coat:

Get a Psy-kick Out of It is the more purplish-looking of the two colors, and it does look purple in the bottle, but somehow it looks like a cool-toned, slightly purplish pink on me when applied. It’s got a super shiny beautiful pink-to-blue shifting shimmer, though, and the base has a translucent jelly-like texture that shows off the shimmer (which strikes me as having a glass-fleck look) very nicely.

Happy Medium has the same overall texture as Get a Psy-kick out of It, with the jelly-type base and glass-fleck-type shimmer, only it’s a fiery bright pink (at times almost red/orangish on me, depending on lighting, as you can see from my photo). As far as I can tell, the shimmer on this one also shifts from pink to blue.

The two polishes had similar formulas and durability. They were reasonably (though not completely) opaque in two coats and dried maybe slightly faster than average. I think both polishes lasted me about  5 days with some minor chipping, but they wore pretty well.

Overall, I’m happy with both colors, though I wish Get a Psy-kick out of It was more purple than bright fuschia! I love how Happy Medium was surprisingly more orange/red than a straight up Barbie pink, though, and wonder if it looks that way on others, too. I’m still a tiny bit sad that I missed the Mercury in Retrograde polishes, but I’m guessing there are probably similar polishes that could scratch that itch if I took the time to look. 🙂